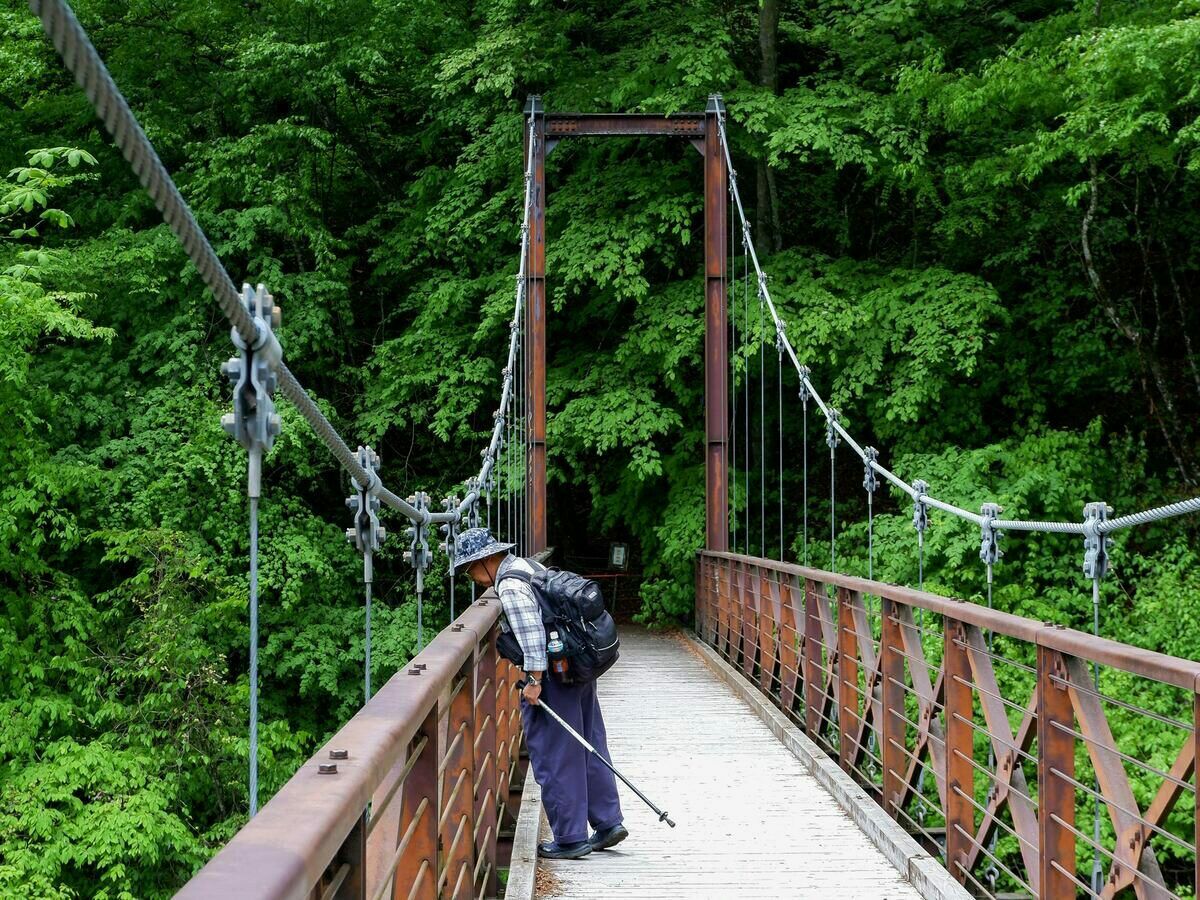 Tokyo is a prefecture with numerous hiking routes. With this article we take you to the top of Mount Mitou in the Chichibu-Tama-Kai National Park. This was not our first trip to the national park, nor was it the first trip we took together with our friend Ai. Nevertheless, the hike to Mount Mitou was quite unique. The three of us had a lot of fun in the almost untouched nature, during the car ride to the destination and back to Tokyo.

Inhalt Verbergen
1 The drive to Chichibu-Tama-Kai National Park
2 Let’s hike to the Mount Mitou
3 Hiking back again … but not without some wood chips!
4 Back to Tokyo with a little Ramen break
5 A great experience, even for less experienced hikers
6 More information

The drive to Chichibu-Tama-Kai National Park

Chichibu Tama-Kai National Park is one of many national parks in Japan. It extends over a total of four prefectures. These are Tokyo, Saitama, Nagano and Yamanashi. The park was originally named Chichibu-Tama National Park, which is a combination of the Chichibu region with the Okuchichibu mountains and Tama, which reflects the western part of Tokyo prefecture. Later, more precisely in 2000, Kai was added to the name, which was the original name of the prefecture, known as Yamanashi today.

The park is relatively easy to reach by car from Tokyo, although the drive can take two to three hours. Those who want to take the train to Mount Mitou, however, will also have to travel a distance by bus, as the region is relatively far from the major transportation networks and is very rural.

In the morning we met up with our friend Ai in Tokyo, who had picked up our rental car shortly before. While this was not the first time we would be taking a rental car, this time Ai and Susann took turns with the driving, after Susann had already gained some driving experience in Japan this year.

So we set off and after adjusting the navigation system in the car, we were surprised that the trip would take much longer than we had actually anticipated. Then we noticed that the navi navigated us purposefully around the expressways and thus we would lose a lot of time due to the numerous traffic lights in Tokyo.

Before we drove onto the expressway, we encountered numerous classic cars, which were apparently on their way to a gathering. Initially, we had a short moment, where we considered whether we should simply follow them, to then mix with our rental car among them. But that probably wouldn’t have worked anyway, so we took the expressway and headed for our planned entrance to Chichibu-Tama-Kai National Park, which was still in Tokyo prefecture.

Mount Mitou is located in the Okutama region and is, along with Mount Gozenyama and Mount Odake, one of the most famous mountains in this region. In the Edo period, this mountain was very difficult to access due to its dense forestation.

Today, the mountain can be ascended quite easily via the main access at Hinohara Tomin no Mori, with most of the trails being very pleasant to walk and numerous signs and maps showing you the way. You must be prepared, however, to read the Japanese lettering on many of the signs, so it may help to memorize the necessary kanji in advance. Nevertheless, even without any knowledge of Japanese, this path is easily manageable, because the maps describe the paths not only by their names, but also with the help of clearly recognizable colored lines.

After we parked our car in the parking lot of Hinohara Tomin no Mori, we bought a soft ice cream for the start and immediately went our way. However, Ai had asked beforehand, how long the small store would be open, which also sold the ice cream, because she wanted to buy some dango on the way back.

Let’s hike to the Mount Mitou

The trail began relatively easy. At the beginning, the paths are very broad and also often covered with chopped wood, so that the initial segments are pleasant to walk. The path passes small houses and has its first highlight at the Mitou no Taki waterfall. This narrow waterfall rises from the mountain and plunges more than 30 meters into the depths, and it can best be observed from the suspension bridge running alongside.

Surrounded by tall trees, along a crystal clear stream, we continued on our way to the summit. So far, we only ever made the experience that the Chichibu-Tama-Kai National Park is not very overcrowded, and it was the same on this day. Of course, we encountered other hikers who greeted us in a friendly manner, but rarely did we have to wait at the side of narrow passages to let someone pass.

As time went by, the path also became a little more uneven and you had to balance over small stones and climb up steps made of the roots of trees. Even though the path became a little steeper and uneven, it was still very manageable. In addition, along the way you can also find numerous opportunities to take a short break, located either on large stones, or on terraces with seating created for this purpose.

Of course, we would not go with our friend Ai to the national park without taking numerous photos along the way, with some pretty stupid poses. We also recorded several small video clips, which you can see summarized in the following video.

However, if you want to fly your drone here, you have to wait until you reach the top of the mountain. Due to many trees and high foliage, it is almost impossible to launch your drone here. Since you always need to see your drone when flying in Japan, launching from a random place on the way to the summit is not recommended.

After a few hours we reached the top of the mountain and took a longer break. Except for another young hiker in colorful outdoor clothing, we were the only ones up here and enjoyed the view of the surrounding mountain landscape. We could even see Mount Fuji a little bit through the clouds and there were numerous places to sit as well. Compared to our last trip in Shuzenji to Mount Daruma, it was almost deserted during our hike in Chichibu-Tama-Kai National Park.

Hiking back again … but not without some wood chips!

After taking a break, we decided to hike back again. Since the whole trail was a circular one, we didn’t know what to expect, but we hoped that even on the last part of our hike, the trails were appropriately marked.

Within a short time, we noticed that the scenery around us was changing completely. Due to the fact that we went around the mountain, we were now on the shady side and the taller trees along the way gave the hike a very mysterious touch.

Also, there was a moment where we were not so sure anymore where we had to go and the memories of our hike along the Koburi Pass became very vivid again. This time we wanted to avoid another hike through a dark forest with many large spiders at all costs. Our confusion came from the fact that there was a fixed path for the route to take. But at the same time, there was also an arrow in the opposite direction. However, we were not the only ones who were a little confused, because the young hiker we had met on the summit was also not certain in which direction he should go now.

In parks like Chichibu-Tama-kai National Park, you always have to expect that you won’t have internet reception with your cell phone for quite a while, which is why downloaded maps or maps on paper can help in an emergency. However, it was not so dramatic here and we just trusted the recommended path and continued hiking down. After a while we could also hear a dog barking, which signaled that we were gradually reaching the edge of the park.

Before we reached the parking lot we passed a large wood craft factory, where you could not only make your own wooden keyring free of charge in a small workshop, but also had the opportunity to grab bags of fresh wood chips. Ai immediately grabbed such a fragrant bag and we were also thinking about whether we should take one with us. But then we decided against it, because we did not know exactly what to do with it.

When we finally reached the bottom, we already heard the repeating loudspeaker announcement that the parking lot would close at 17:00. We still had about 20 minutes. Unfortunately, all the stores had already closed, so Ai didn’t get to have her originally planned snack, but at least she had a bag of wood chips!

Back to Tokyo with a little Ramen break

This time Susann was supposed to drive the way from the national park to Tokyo. While she had already gained some driving experience in Okinawa, in the dark and the rain, too, the winding mountain roads on the edge of the national park were a completely different challenge. We decided to take a little break on the way back and kept our eyes open for a ramen bar or similar restaurant.

Compared to Tokyo, you won’t find as many restaurants on the outskirts of Chichibu-Tama-Kai National Park, obviously, and also the opening hours are a bit different in the rural areas than in the city. Nevertheless, we found a well-lit ramen bar in the town of Hinohara, where we were able to enjoy a really huge and delicious ramen bowl.

Then we continued on to Tokyo via the expressway, with the national park behind us and the lights of Tokyo in front of us. Usually, I’m not a big fan of sitting in the back seat of a car. My stomach doesn’t tolerate driving very well. However, I already sat next to Ai during the drive to the national park. So now, Ai and Susann had a good opportunity to talk a bit while I relaxed.

By the time we, or better Susann, had passed some toll roads, we also reached our destination near the Omotesando train station. We said goodbye and while Ai brought the car back to the car rental, we took the train home.

So what did Ai do with the wood chips from the national park, you may ask? She put them in an open glass bowl, so now the scent of the chips has become a natural scent dispenser for her apartment.

A great experience, even for less experienced hikers

This part of Chichibu-Tama-Kai National Park is perfect for those who want to make their first trip on their own in Japanese nature. The mountains are not too steep and the landscape is quiet and very diversified. There is much to discover, but also many opportunities for relaxation.

If you don’t have the possibility to drive by car, you can take the train from Tokyo to Haijima, which takes about 1 hour. From there you can take the bus to Tomin no mori, which also takes a little more than an hour. But you can’t go any faster by car.

Let your drone fly in japan

Hiking along the Koburi Pass - that escalated quickly